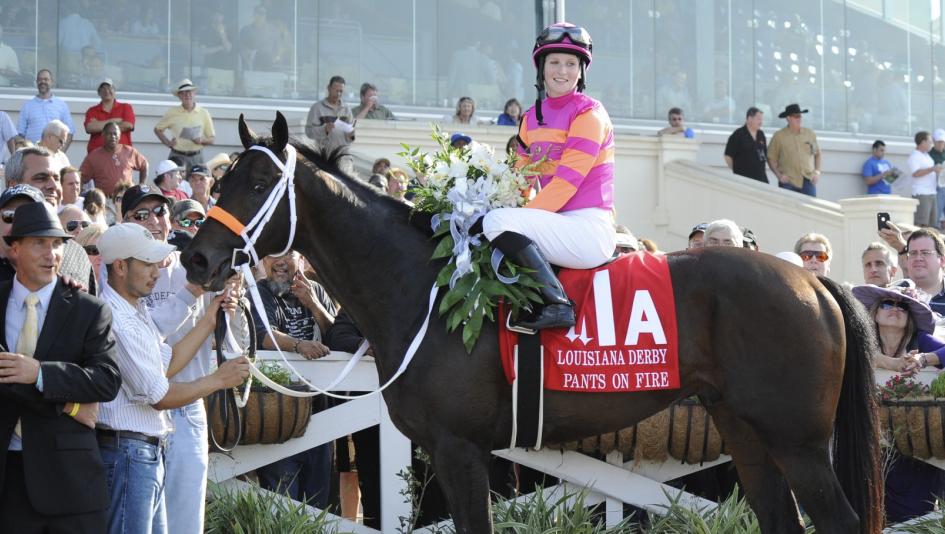 Two-time Louisiana Derby winning jockey Rosie Napravnik is pictured in the winner’s circle with PANTS ON FIRE in 2011.

The Kentucky Derby is less than seven weeks away, and the final round of Prep Races kicks off this Saturday in New Orleans.  The Louisiana Derby at the Fairgrounds offers KD qualifying points and a hefty purse for 3-year-old Derby hopefuls, including WAR OF WILL, COUNTRY HOUSE, and SPINOFF.

To get ready for this year’s edition, the Daily Racing Blog takes a look at the facts and stats surrounding the race.

0 – The number of Louisiana Derby Wins to date for trainer Mark Casse, who will bring expected favorite WAR OF WILL into the race on a three-race winning streak.

2 – The number of Louisiana Derby Wins by Rosie Napravnik, the only female jockey to win the race.

3 – Three of the last four Louisiana Derby Winners also won the local prep for the race, the Risen Star Stakes.  This year’s Risen Star winner?  WAR OF WILL.

4 – The record number of Louisiana Derby wins by trainer Todd Pletcher, including last year with NOBLE INDY.  Pletcher has SPINOFF in this year’s race.

5 – Five of the last 10 Winners went off as the Post-Time favorite.

6 – The number of Risen Star runners who are also entered to compete in the Lousiana Derby on Saturday, including the top three finishers WAR OF WILL, COUNTRY HOUSE, and ROILAND.

8 – Lengths- The biggest margin of Victory ever in the race, when CITY LINE won in 1963.

11 – The number of times the race has been decided by a nose, most recently when REPENT defeated EASYFROMTHEGITGO in 2002.

100 – The number of Kentucky Derby qualifying points the Louisiana Derby Winner receives, virtually guaranteeing the horse a spot in the Churchill Downs starting gate. The second-, third-, and fourth-place finishers get 40, 20, and 10 points, respectively.

1996 – The last time the Louisiana Derby Winner also won the Kentucky Derby.  It was GRINDSTONE who completed the double.  BLACK GOLD (1924) is the only other horse to Win both races.

Those were some fun and insightful numbers regarding the big race on Saturday.  Be sure to stop back Friday as the Daily Racing Blog takes a closer look at the field of eleven runners.  We’ll be looking for Value, and hope to find a horse that will give WAR OF WILL a run for the money.