After Rosie Napravnik rode UNTAPABLE to victory in the 2014 Breeders’ Cup Distaff, she made a stunning announcement on national television.  She was seven weeks pregnant.  She was retiring.

Since 2005 Rosie had worked diligently to build her career in this male dominated job market.  She had finally become a go-to jockey for many prominent trainers.  She had been the leading rider at Fair Grounds every year from 2011-2014 and topped the standings at Keeneland in 2013 and 2014.

In regard to the surprise BC declaration of 2014 she says;  “I think people probably did have a hard time understanding, but for me, stepping out at that time was the victory of it all.”

She had married Joe Sharp, a trainer, in 2011.  She yearned to spend more time with him and to help him with his career.  They very much wanted to start a family.  And she had made her mark on the game.

History will remember her for her handiwork in the Kentucky Oaks and the Kentucky Derby.  She was the first female rider to win the Oaks, the companion race to the Derby for 3-year-old fillies, accomplishing that with aptly-named BELIEVE YOU CAN in 2012.  That represented a monumental triumph for her.

“It was historical for the female aspect,” she said, “but just as a rider, it was validating for my career and the level I wanted to be at. That was the jump start to the success I had the last couple of years of my career.”

She became the first woman to pilot more than one Breeders’ Cup winner, getting the job done with SHANGHAI BOBBY in the 2012 Juvenile and later with UNTAPABLE in the Distaff.

In 2013, she broke new ground as the first female to compete in all of the Triple Crown races in the same season.  She finished fifth with MYLUTE in the Derby and third with him in the Preakness before guiding the filly UNLIMITED BUDGET to sixth in the Belmont.  No female rider had ever placed higher in the Derby or Preakness. 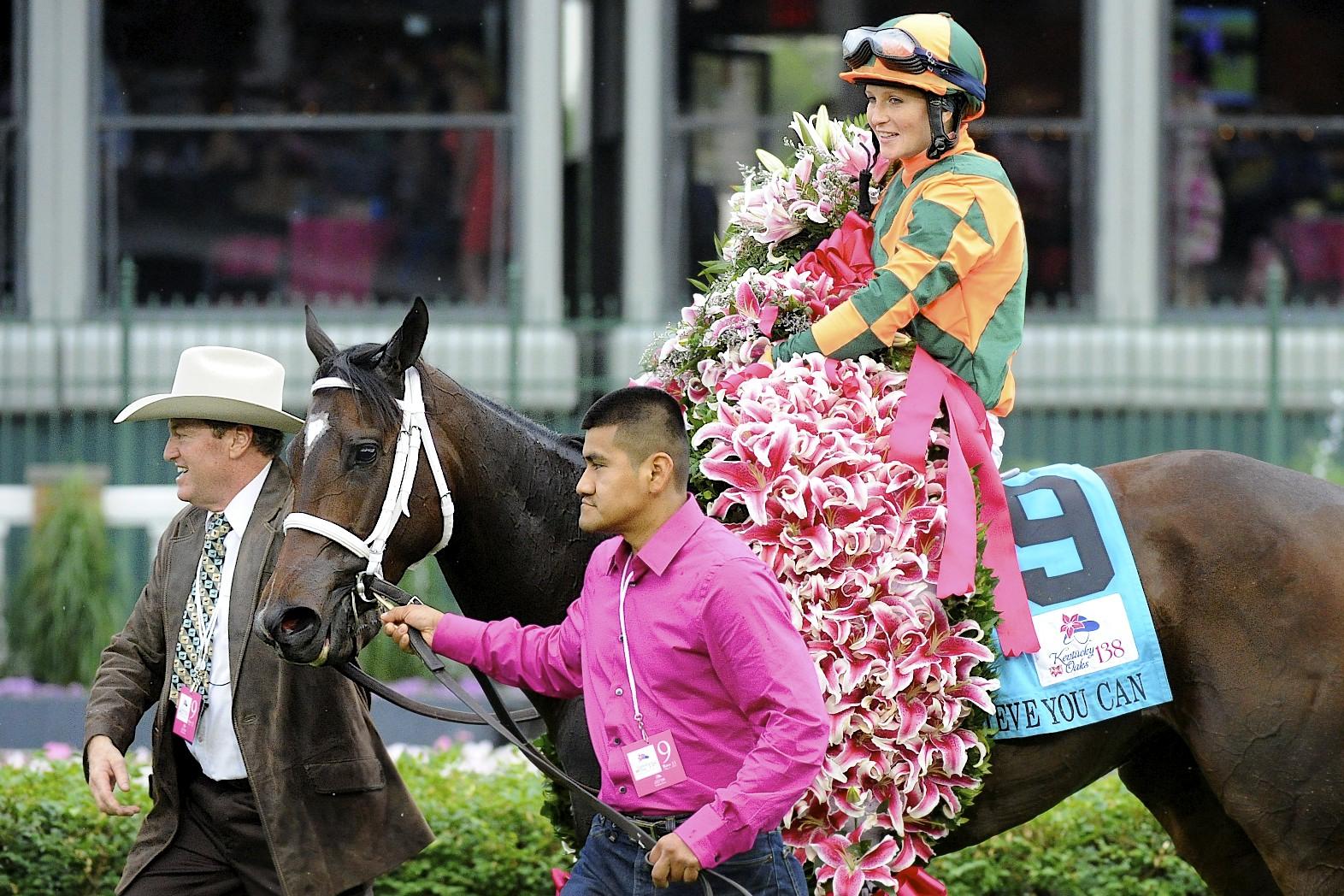 Napravnik after winning the Kentucky Oaks on BELIEVE YOU CAN

She was meticulous in her race preparation, and through the years developed a keen understanding of the styles of opposing jockeys and even horses she had never ridden.  It was as if she could close her eyes and picture exactly how a particular race would unfold, who would break sharply and how the horses would be positioned for the backstretch run.

That, in turn, gave her the feeling that she could not be beaten.  She rode with a surety that her mounts responded to.  “When you feel that prepared, you have that much confidence,” she said.  “And confidence can be what wins races.”

Being a wife and mother, of course, present much different challenges.  She and Sharp have two sons.  Carson is 2, Tucker is 1.  Napravnik said of motherhood: “It’s definitely one of the hardest and most rewarding things I’ve done, for sure.  And I’ve done a lot of things and had a lot of rewards, so that says a lot.”

Napravnik appreciates all of the good that has come her way.  “My life in general has exceeded my expectations,” she said.  “I just feel like a very fortunate person.”

That leaves the one question that is always asked. Will she ever make a comeback? Her answer never varies.

“If I was going to,” she replied, “I would have already.”

The Daily Racing Blog wishes Rosie well in all her family endeavors.