SEABISCUIT was the perfect horse for his time.

He did not look the part of a great racehorse.  He was relatively small and knobby-kneed with a laid-back demeanor that suggested he would much rather sleep than step into the starting gate.  It appeared he could not run a lick when he dropped the first 17 starts of his career.  He was the butt of bad jokes, even in his own barn.

But a change of hands to unlikely connections would ultimately transform SEABISCUIT into a much-needed star, a source of hope when one was desperately needed during the Great Depression.

As an article published on April 27, 1940 in the Saturday Evening Post read: “SEABISCUIT is the Horatio Alger hero of the turf, the horse that came up from nothing on his own courage and will to win.”

His climb from nowhere to notoriety only enhanced his appeal at a time when suffering men, women and children looked for something, anything, to cling to.  Who wouldn’t want to embrace a horse that finally won on his 18th try?  How could anyone not like a horse that was for sale three times for the modest price of $2,500 as a 2-year-old but went untouched?

He would race 35 times as a 2-year-old – an unheard of grind these days – and produce five wins with seven second-place finishes.  He would win only four of his next 12 starts for his trainer, the acclaimed James “Sunny Jim” Fitzsimmons, before car salesman Charles Howard purchased him for $8,000 and entrusted him to a much lesser-known conditioner, Tom Smith.

Smith was known for his unorthodox methods, but they struck a chord in SEABISCUIT. Smith sensed the greatness that was there, and he and new rider Red Pollard made sure to bring it out of him.  Victories soon followed in the Detroit Governor’s Handicap and the Scarsdale Handicap at old Empire City Racetrack in Yonkers, N.Y.  When SEABISCUIT shipped by train to California in the autumn of 1936, he capped his turnaround 3-year-old season with impressive victories in the Bay Bridge Handicap and the World’s Fair Handicap.

SEABISCUIT suffered a devastating setback, finishing second by a nose to ROSEMONT, in the Santa Anita Handicap early in 1937 in a defeat that endeared him to the public all the more.  It turned out that Pollard never saw ROSEMONT surging because he was blind in one eye due to a riding accident during training hours, a fact he had kept hidden.

Howard remained unwavering in his loyalty to Pollard.  He was rewarded when “The Biscuit” swept 11 of his 15 starts and finished the year as the leading money earner in the United States only to lose the  Horse of the Year title to WAR ADMIRAL, a Triple Crown winner that season.

That set the stage for those two giants to meet.  It was only a matter of where and when. For various reasons, the much-anticipated match race did not occur until Nov. 1, 1938. WAR ADMIRAL, with his blistering early speed, was heavily favored in what was hailed as the “Match of the Century.”

SEABISCUIT, with George Woolf replacing the injured Pollard, would have none of that. Smith had been secretly training SEABISCUIT to break sharply when he heard the starting bell and to display early speed he had never flashed before.  Approximately 40,000 fans at Baltimore’s Pimlico Race Course and another 40-million fans who listened intently on radio followed in disbelief as “The Biscuit” took early command.

As Pollard instructed him to do, Woolf gave his horse a breather down the backstretch, allowing WAR ADMIRAL to fully engage him.  Pollard was sure “the people’s champion” would respond by fighting as if his life depended on it.  And so it was that Woolf experienced a tremendous surge as his mount eyeballed the Triple Crown champion and roared off to dominate the 1 3/16-mile contest by four lengths.  (See picture below) 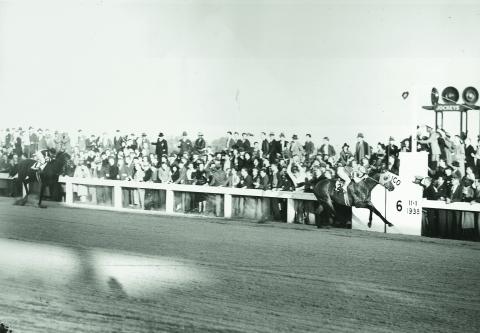 SEABISCUIT soundly defeats WAR ADMIRAL in a match race at Pimlico in November 1938.

“The Biscuit” was named Horse of the Year in 1938, the highlight of a rags-to-riches 89-race career that allowed him to finish (at that time) as the all-time leading earner with $437,730 in purse money.  He was retired to Ridgewood Ranch in California.  In a testament to his popularity, SEABISCUIT entertained more than 50,000 visitors in the seven years he spent there before he passed away.

During hard times when a nations spirits needed lifting, SEABISCUIT certainly did his part.  If you enjoyed this piece, and would like to read more about this little wonder-horse, the Daily Racing Blog highly recommends the 2001 book; SEABISCUIT: An American Legend, written by Laura Hillenbrand.