Veterans Day (originally known as Armistice Day) is observed annually on November 11th to honor military veterans.  Perhaps the most largely unrecognized, and sometimes altogether forgotten veterans are the horses that served alongside the soldiers.

Since the domestication of the horse, humans and horses have shared a partnership that has been integral to the thriving of civilizations.  Horses were essential in agriculture, transportation, and warfare, not to mention companionship in some of history’s darkest hours and in the face of humankind’s brutality.

Throughout the United States’s military history, the horse played an indispensable role. In wartime, the horse was used to transport cavalry troops, supplies, and artillery weapons as well as for charges, scouting, raiding, and communication.

While serving man and country, the horse faced many hardships including disease, starvation, exhaustion, and injuries.  Ultimately, many suffered and died in service.

Here then is a profile of one such noble horse that deserves recognition for its heroism while serving in the United States Military:

Sergeant Reckless is perhaps the best example of an equine “hero.”  The 14 hand fiery chestnut mare served bravely as a U.S. Marine in the Korean War.  RECKLESS, was purchased at a Seoul racetrack in 1952 by Lieutenant Eric Pedersen, the commanding officer of the Recoil-less Rifle Platoon, Antitank Company, Fifth Marine Regiment.

Pederson bought the horse for $250 from a Korean boy who needed the money to buy an artificial limb for his sister who lost a leg to a land mine.  The Marines dubbed the horse RECKLESS as an aside to the recoil-less rifle that they used. 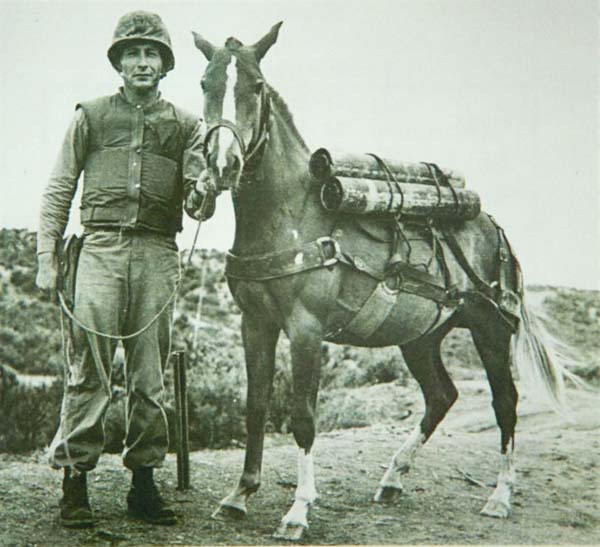 The little mare with the white blaze had a big personality and was well loved and revered by her fellow Marines.  She was known to stick her head in their tents for treats, occasionally sleep in the tents with the men, and eat scrambled eggs and drink beer alongside them.  If she noticed she was different from her fellow soldiers, she definitely didn’t show it.

Lieutenant General Randolph Pate noted the camaraderie between the horse and men. “I first saw this little lady. . .when the [First Marine] Division was in reserve for a brief period,” he wrote.  “I was surprised at her beauty and intelligence, and believe it or not, her esprit de corps.  Like any other Marine, she was enjoying a bottle of beer with her comrades.  She was constantly the center of attraction and was fully aware of her importance.  If she failed to receive the attention she felt her due, she would deliberately walk into a group of Marines and, in effect, enter the conversation.  It was obvious the Marines loved her.”

She carried the ammunition up and down rugged terrain and hills, most of the time without a handler and through the battle zone with gun and cannon fire all around her.  The smart and industrious mare was trained to avoid trip wires and to drop to the ground if caught under fire in the open.  She was cut by shrapnel at least twice, once over her left eye and once on her flank, but neither injury slowed her down. 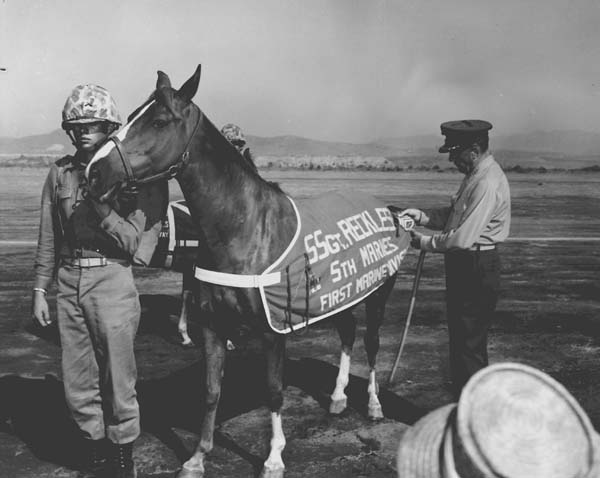 After the war, RECKLESS was brought back to the United States.  Because of her bravery, the Marine Corps honored her with the rank of Staff Sergeant and nine other awards including two Purple Hearts and a Marine Corps Good Conduct Medal.

“In my career I have seen many animals that have been adopted by Marines, but never in all my experience have I seen one which won the hearts of so many as she did,” recalled General Pate.

RECKLESS lived in retirement at the Marine Corps Base, Camp Pendleton, in California. She died there on May 13, 1968, at 20 years old and was buried with full military honors. A bronze statue of her now stands at the National Museum of the Marine Corps in Triangle, Virginia.

Male, female, two legs or four, the Daily Racing Blog wishes to thank all those who have served in the United States Military.  Salute.

One thought on “Veterans Day”